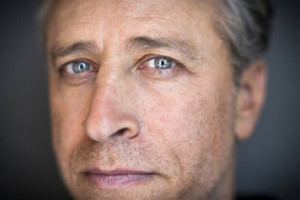 Jon Stewart in the offices of “The Daily Show” last year. Credit Chad Batka for The New York Times

Late-night legend, Jon Stewart announced that he will be leaving The Daily Show.  Check out what The New York Times has to say.  The article was written by Jason Zinoman.  Late-night won’t be the same…  Read the story here.

It’s hard to imagine a presidential election without Jon Stewart at “The Daily Show,” but we are going to have to get used to it now that the host of the landmark political comedy program of our era is leaving his desk before the first primary of 2016.

In a stunning announcement during the taping of his show on Tuesday, Mr. Stewart announced that after more than 16 years of telling jokes at 11 p.m., he would do his final show before the end of this year, which represents the end of one of the most impressive and influential runs in talk-show history.

Coming not long after Stephen Colbert concluded his virtuosic “Colbert Report,” it’s also the end of an era of incredibly sharp topical nightly television at Comedy Central. “The Daily Show’s” impact on late night was arguably as great as that of prestige HBO shows like “The Sopranos” and “The Wire” on television drama.  Read more…