State of the Union Delivered by Tweets? 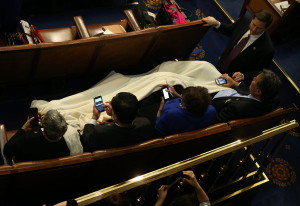 Did you tweet during the State of the Union?  Check out this story written by Michael Roston and Derek Willis of The New York Times about who did. Fascinating…sign of the times.

Members of Congress once had two primary means of responding to presidents while the yearly State of the Union address was delivered: stand and applaud, or sit on their hands and glare. Thanks to smartphones (or staff tucked away in offices with the passwords to official Twitter accounts), senators and representatives can now comment in real time to every word a president speaks. As they did in January 2014, the congressional audience wrote more than a thousand tweets during the approximately 65 minutes that President Obama spent delivering the State of the Union.

While some Democrats and Republicans may have been sitting next to one another as a bipartisan act, members on Twitter continued to talk past each other during the speech on a partisan basis. Members of Congress of opposite parties didn’t agree on much, but they did appear to become animated on Twitter during similar parts of the speech. House Republicans in particular reserved their strongest disagreement with the president over his veto threats as well as aspects of his economic vision, like the proposal for free community college tuition and his ideas for reforming taxation. During some of these moments in Mr. Obama’s address, Democrats amplified and expanded on the president’s message. Read more…