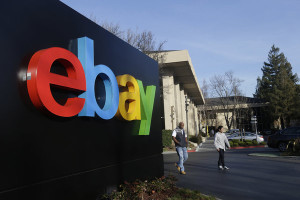 EBay, which already announced it would spin off PayPal, is now considering options for its warehouse and logistics division. Credit Marcio Jose Sanchez/Associated Press

The latest news from EBay as reported in today’s The New York Times.

EBay has made billions reinventing ways to sell items on the Internet. Now, in the face of declining growth, the company must reinvent itself once more.

Facing stiff competition and the declining growth of its auctions business, eBay announced a shake-up of the company on Wednesday, saying it planned to cut 2,400 positions, or 7 percent of its global work force.

“It’s going to get a little bit worse before it gets better,” said Bob Swan, chief financial officer of eBay, citing declines of traffic and repeat customers in the company’s online auction business. “Our ecosystem has simply been disrupted.”

The layoffs come in advance of a planned spinoff of PayPal, the company’s payments arm, set for later this year.  Read more…